Haiti. It has it’s own rhythm. 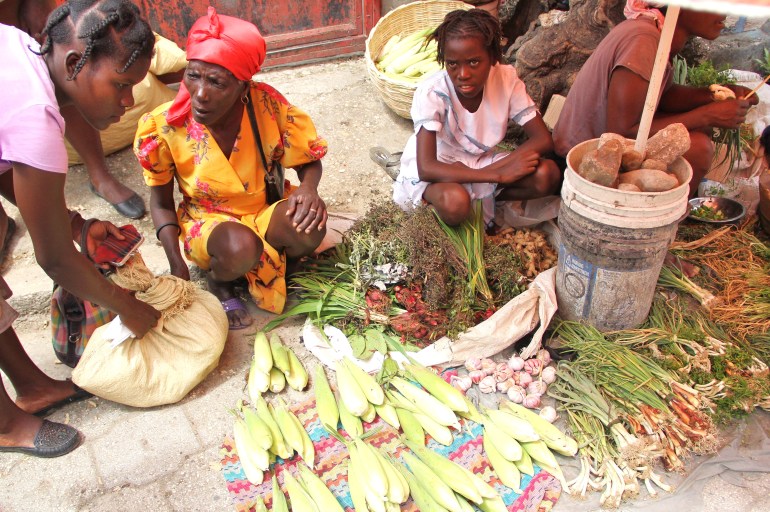 Our team of 21 Americans, who quickly transitioned from strangers to friends, navigated this vivid landscape for only a week. But the trip felt so full, so bursting with life and color and new discoveries, that I felt on our last day as if a month had gone by.

Life to the full. That, among many things, is what I experienced in Haiti.

We landed in Port-au-Prince on Wednesday, June 3 and were immediately greeted by a band playing Carribean-flavored music that bounced off the tin airport walls and drifted out into the humid heat. After piling into five rented trucks, we drove into the mountains to a community called Feja, home of GVCM church and orphanage – our home base for the week.

Our days were packed, but in a way that was so different from the “packed” schedule I keep at home. It was richer, fuller. Time actually passed slowly.

We packed more granola bars, bug spray, medicines and rolled-up t-shirts into carry-on-sized suitcases than I ever thought possible.

When we pulled up to the orphanage on our first day, precious kids packed the courtyard, packing our vision and our spirits with the sweetness of new friendships.

We packed gallons of rice and beans into family-size plastic bags to pass out to moms living along the bumpy roads in the hills.

It was a new kind of packed.

For a bit of context, Haiti is a pretty chaotic place. Infrastructure is not great, so speed is not a strong suit. Getting electricity and clean water to drink is a challenge for many people, and it was often a challenge for us. Add in the traffic chaos you encounter on the roads, and you’ll find that tasks like meal prep, laundry, shopping and traveling can turn into day-long ventures. Cars break down. Roads flood or get blocked by giant semi-trucks for hours at a time. Parades interrupt marketplace business. Price-haggling turns a trip to the store into a study of economics.

Two years ago, when I was on a college trip to the Dominican Republic – just on the other side of the island – I heard a metaphor for this chaotic culture that has always stuck with me. After the bus we were riding in nearly crashed into dozens of passing motor bikes, and several people expressed their shock, the leader of our trip said: “It’s like a dance. For the people who don’t know the rhythm, it feels chaotic, uncontrollable, and dangerous. But for those who know the rhythm? It’s easy.”

That was me alright. In the middle of the chaotic dance, fumbling my steps. Waiting. Trying to learn the rhythm.

Our team did a lot of waiting throughout the trip. Waiting for cars to start. Roads to clear. Rain to pass. Prices to be negotiated.

One afternoon, Tori said, “you know that song ‘Automatic‘ by Miranda Lambert? That’s what I think of when I think of life at home.”

In our culture, we demand things quickly and thrive on efficiency. Immediacy is our beat.

In Haiti, people are content to go slow. Or maybe, they have simply learned the rhythm of patience. 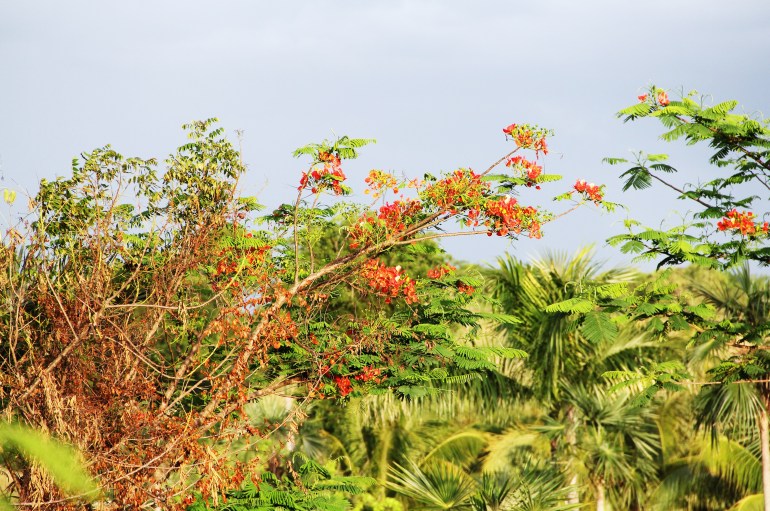 So, we waited. We set out to learn the rhythm with them.

While waiting for cars to start, I talked to my team members. I asked them questions about their homes and faith and why they chose to come to Haiti.

While waiting for roads to clear, I saw more. The greenest palm trees next to red flowers in bloom. Colorful advertisements peeling back from rebar-lined shops. A stone wall being built along the highway – all by hand – by a group of local guys. Kids cooling off in the river next to mamas doing their laundry in the murky water. The vivid contrast of brightly-colored clothes against dark ebony skin.

While waiting for rain to pass, I encountered more new friends. The kids we met were eager to play, to learn, to stare at our pale faces and to see if we held any snacks. I got to look into their eyes, and even get to know some of them. Thanks to the waiting.

While waiting to buy rice in the market, we got to witness a giant Catholic parade one afternoon, white-robed kids leading a priest through town to a beautifully-decorated church.

I waited. I learned. And I’ll say simply this: There is a richness, a beauty that emerges in waiting. In packing in not more stuff, but more of the good stuff.

I’m telling you – waiting isn’t just the middle space. There are things to be found there. It’s a beautiful rhythm.

On our very last day in Haiti, while driving back up the mountain with two dozen teenagers from the orphanage in tow, we pulled over just outside Port-au-Prince to get some bananas.

As you can probably guess, it wasn’t just a stop for bananas. The rhythm kicked in. What could have taken 20 minutes took almost four hours, thanks to the breaking down of not one but two of our team trucks.

But. What a full four hours that was! There, by the side of the chaotic and dusty road, surrounded by curious onlookers and stray goats, helpless to the mysteries of rental cars, I think we finally got the rhythm.

We waited. We learned a bunch of new words in creole from the girls. We danced to Justin Beiber and Michael Jackson songs that blared through our tiny truck stereos. The boys were content to sit in the flatbeds of the trucks and pass bread and peanut butter around for lunch. We sat with new people and told stories and laughed and tried not to get our hopes up each time we were told “20 more minutes!”

In the practice of patience. In the forced-fullness of the in-between. In the middle space between the to-dos of a packed day.

We got the beat. 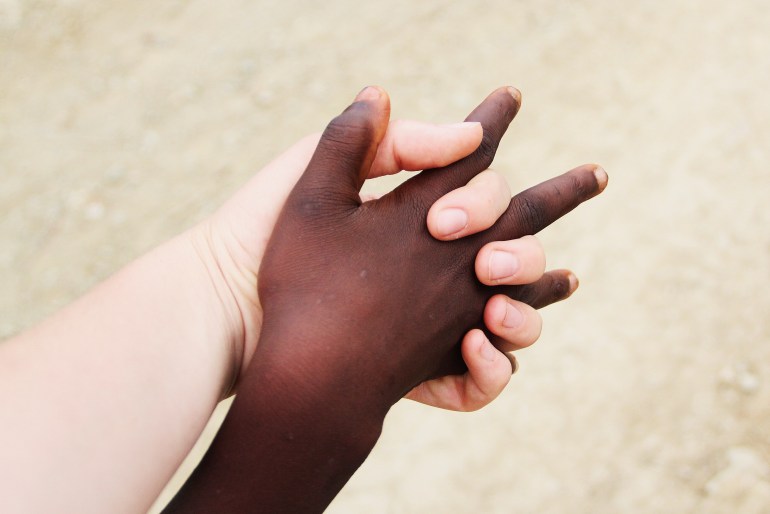 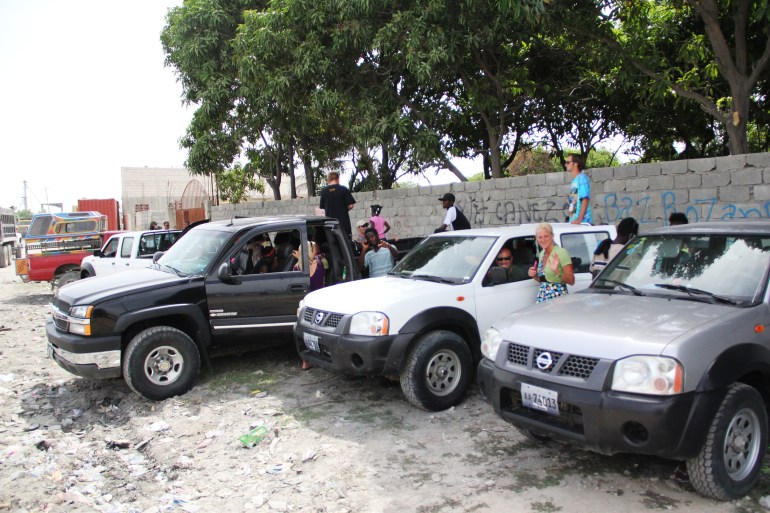 More stories and pictures from Haiti to come!

I'm Laura — a writer that values creativity, intentionality and legacy. My goal is to leverage the power of language to promote empathy and cultivate beauty. I love to read, learn and connect with my neighbors. My roots and home are in Denver, Colorado. Here is where you'll find the letters I'm writing about it all — community, culture and meaning in the everyday. View all posts by Laura Willetto